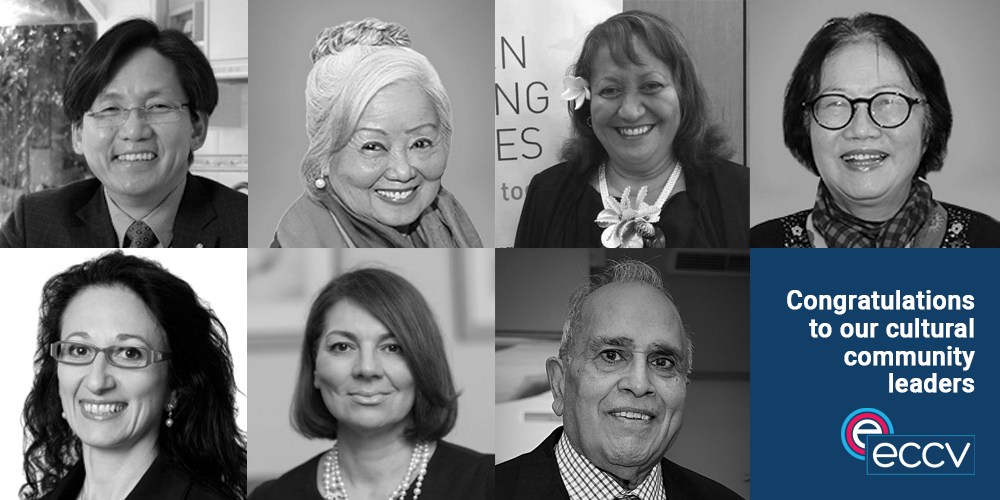 Congratulations to former ECCV chairperson, Phong Nguyen, who was among several ECCV members and leaders of member organisations recognised for their service to the community in yesterday’s Queen’s Birthday 2021 Honours List

Phong, who was Chairperson of ECCV between 2003 and 2007, received the Medal of the Order of Australia for his service to the Vietnamese community. Over the past three decades, Phong has worked tirelessly to promote cultural diversity and multiculturalism at a local, state and federal level.

We also congratulate the following ECCV members and leaders of member organisations for receiving a Medal of the Order of Australia:

Dr Teresa de Fazio for her service to tertiary education. Teresa has been a Lecturer in Higher Education at the University of Melbourne since 2010 and a Senior Lecturer at Victoria University since 2008, where she has also been the Manager of the Cultural Diversity Office since 2013.

Ngatuaine Hosking for her service to the multicultural community of Victoria. Ngatuaine is a long-serving project officer of the Victorian Immigrant and Refugee Women’s Coalition and leader of the Cook Islands community. She was the first councillor of Cook Island’s background to be elected to the City of Monash Council.

Dr Santosh Kumar for his service to the Indian community. Santosh is Treasurer of the Northern Region Indian Seniors Association, where he was the foundation president between 2008 and 2014. Santosh has also been an Honorary Adjunct Professor at RMIT University in the School of Mathematics and Geospatial Sciences since 2017.

Faye Spiteri for her service to the community through social change organisations. Faye is the current CEO Of Fronditha Care and was inducted into the Victorian Women’s Honour Roll in 2019. Between 2009 and 2019, Faye was also Chair of the InTouch Multicultural Centre Against Family Violence.

Thanh-Kam Tran-Dang for her service to the Vietnamese community. Thanh-Kam has been President of the Australian Vietnamese Women’s Association since 2011 and was inducted into the Victorian Women’s Honour Roll in 2020.

We also congratulate Victorian Multicultural Commissioner, Viv Nguyen, on receiving the Member of the Order of Australia Honour for her significant service to the multicultural community of Victoria.

Viv’s work as a business executive and as a community leader within the Vietnamese community has been focused on inspiring Victorians to celebrate our diversity and differences.