ECCV stands in solidarity with the First Nations peoples of Australia and applauds their leadership in rejecting racism.

The global Black Lives Matter protests are a huge wake up call to the whole community on the impacts of racism and the destructive effects it has on people’s lives… especially First Nations people in Australia. 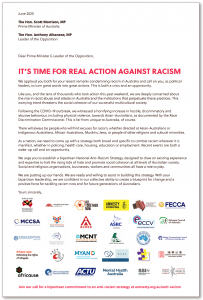 ECCV supports the work of FECCA and other national peak bodies in calling for bi-partisan leadership on anti-racism action. ECCV has been leading coalition building against racism in Victoria through its All One Together campaign

How often to do we hear I’m not Racist BUT… Racism is about fear… Any form of racism is totally unacceptable. We strongly reject all forms of racism but acknowledge that racism is very real and is a systemic problem for Aboriginal and Torres Strait Islander people. A recent ANU study has found seventy-five per cent of Australians hold an implicit bias against Aboriginal and Torres Strait Islander peoples. The study, published in the Journal of Australian Indigenous Issues, is based on more than 11,000 unique responses to an implicit association test over 10 years.

Through ECCV’s All One Together campaign, we approach our ongoing anti-racism work through a systemic lens. This approach is more important than ever in the context of the Black Lives Matter movement. It is up to all of us to play a role in rejecting destructive attitudes, behaviours and systems that perpetuate injustice and entrench disadvantage.

In a soon-to-be-released campaign video, award-winning activist and entrepreneur Khadija Gbla, states “As a new migrant and some-one who has found safety in Australia, we need to acknowledge the history of this nation. We work together and we stand behind First Nations people in their leading of Australia to where we need to go. They know Australia best, this is their country… Australia is precious which is why we need to work together to make it a safe place for everyone”.

ECCV throughout our 46-year history, has advocated for equality and consulted with governments and institutions about inequality and injustice. We are committed to lending our support to our Aboriginal brothers and sisters in their quest to have Australians value and respect their continuing cultural and spiritual connection to this land.

We stand in solidarity with our First Nations communities and applaud their leadership in rejecting racism.

We have a responsibility going forward as a broader community to work on this together. #TakeDownRacism #AllOneTogether