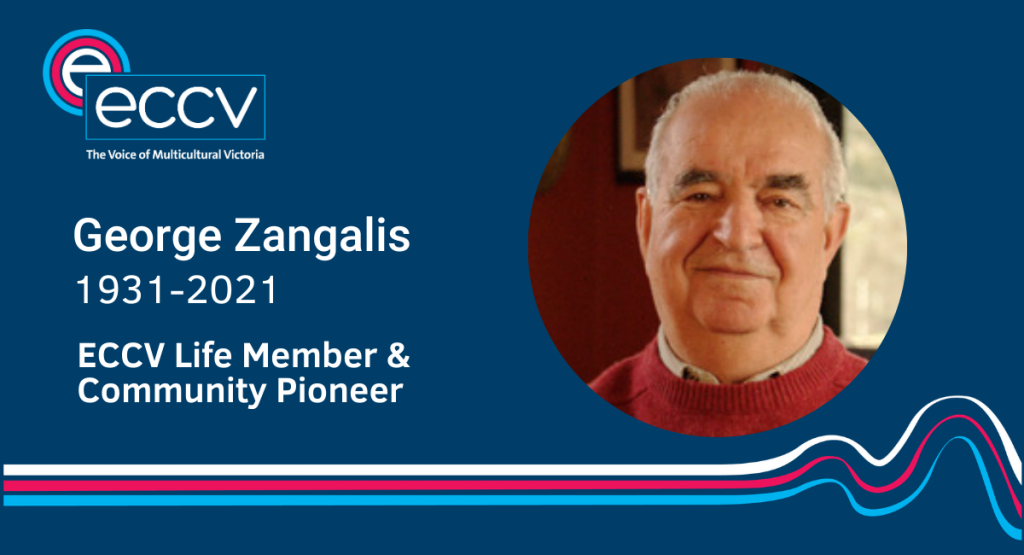 The Ethnic Communities’ Council of Victoria is deeply saddened by the passing of George Zangalis, one of ECCV’s founders.

George was a leading advocate for migrant workers through his work in the trade union movement and a pioneer of multicultural broadcasting in Victoria. His legacy is a lifetime of political activism, community service and contribution to Australian multiculturalism.

George was honoured as a life member of ECCV in 2020 in recognition of his commitment and energetic advocacy on behalf of migrant communities in Australia.

Born in Greece in 1931, George was the fourth in a family of five children. He grew up during the Resistance of the Greek people against the German occupation and the post-World War 2 Greek civil war.

After arriving in Australia in February 1950, aged 18, he became immediately involved in the working class and progressive organisations in the Greek community, the wider Australian labour movement, and the fledgling multicultural campaigns. His commitment to these causes continued throughout his lifetime

George was one of ECCV’s founders and served on the Board several times over its 47-year history. He was also a leading contributor to the Federation of Ethnic Communities’ Councils of Australia’s support for migrant rights.

His involvement in numerous political, industrial and other campaigns is outlined in his 2009 book, Migrant Workers and Ethnic Communities. Their Struggles for Social Justice and Cultural Rights. The Role of Greek-Australians.

George left us on an auspicious day, the celebration of the bicentenary of Greek Independence and Greece’s fight for freedom and democracy. George was one of the Greek Australian community’s local heroes.

He died ahead of a tribute to his life being planned for his 90th birthday in April.

Our sincere condolences to his wife Cavell, his children, Vasso and Paul, and his grandchildren.

In lieu of floral tributes, contributions can be made to the George Zangalis (GZ) Memorial Account towards the digitisation and publication of George’s extensive ASIO files, compiled during his years of political activism. (BSB 313 140. Account number 123 254 453).